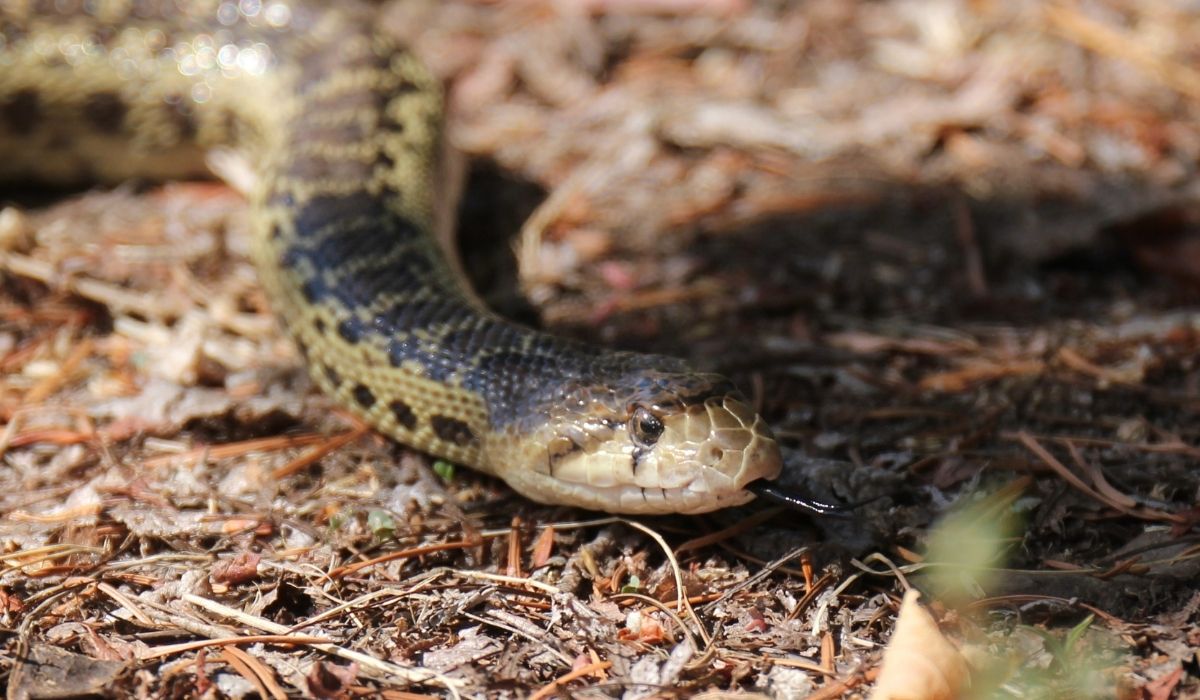 It’s uncommon to find one, so asking if Gopher Snakes are good pets is valid. You won’t spot this species in many reptile owners’ homes, and in this article, you’ll find out why!

Many people know Gopher Snakes as wild snakes, and it’s not the first reptile that comes to mind when you’re searching for a pet. They’re an intelligent species and can adapt to different habitats.

In this article, I share whether they make good pets and some interesting facts about them!

You won’t see them a lot, which might make you think they’re terrible to keep, but Gopher Snakes make good pets.

They’re a bit intimidating due to their size and muscular build, but in reality, Gopher Snakes are one of the best beginner constrictors. The species is gentle when treated nicely and only shows aggressive behavior when they truly feel threatened.

Gopher Snakes will warn you when you need to stay away, and if you learn their signs, you’ll build a great relationship with your snake!

Whenever your Gopher feels threatened, they’ll let you know to steer clear. The three most common signs they show include:

Gophers are hardy snakes and don’t need much to live in the wild, and keeping one in captivity is relatively easy.

Enclosure Of A Gopher Snake

Gopher Snakes like to spend their time underground or in dens, and their enclosure should have a spot where they can do this.

Your Gopher tank shouldn’t be less than 4 x 2 x 2 feet and be decorated with rocks, shrubs, and branches.
You can choose between glass, plastic, or a wooden enclosure. Whichever one you choose should be secured tightly because Gopher Snakes are known for escaping.

Temperature And Humidity For A Gopher Snake

Gopher Snakes thrive in temperatures ranging from 75°F – 85°F. The warmer side of your snake’s tank should have a spot for them to bask, while the cooler end can have space for their water bowl.

High humidity levels can make shedding a challenge for Gophers, so it’s best to keep it between 40% and 60% in their tank. 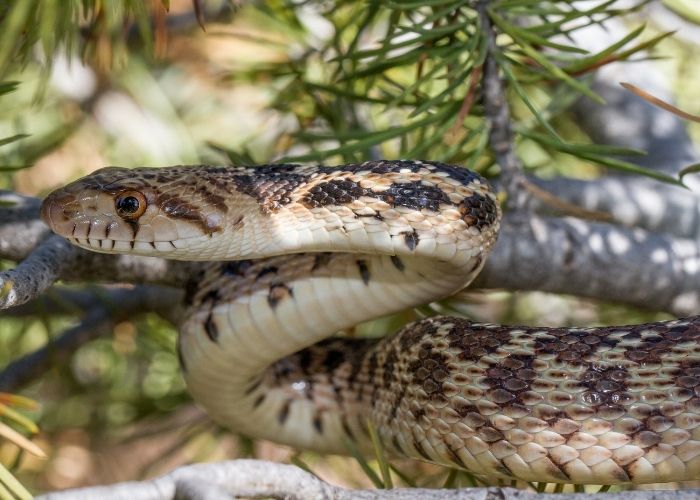 Gopher Snakes have a big appetite, and if you’re not careful, you may overfeed your snake.

You should start your baby Gopher on thawed mice and move to rats as they get older. Only offer meals once a week and watch for signs that your Gopher may be hungry in between.

If your Gopher Snake refuses to eat, they may still be full or need a little extra motivation to eat. If this is the case, you can wiggle their prey with a pair of tongs to get them interested.

Read more about Do Gopher Snakes Have Teeth?

Gopher females and males are similar in size and can both live up to 30 years.

They’re almost a foot long when they hatch, though their size varies between subspecies. Mature Gopher Snakes can reach a length of 6 to 9 feet!

How To Handle A Gopher Snake

Gopher Snakes are pretty active and tend to move around a lot when you’re trying to handle them.

Always pick your snake up from above and be gentle. You should offer them lots of support using both hands since Gophers aren’t the best climbers. Just be careful not to restrict their movement.

Unless your snake already trusts you, don’t touch the top of its head. You should also avoid handling your snake after they’ve eaten a meal or when they’re near shedding.

You should handle your Gopher Snake at least three times a week for about 10 minutes each session to keep them tame.

Here are some more handling tips:

Learn more about How Big Can A Brazilian Rainbow Boa Grow?

Gopher Snakes make good pets despite their scary appearance. They’re intelligent, and most of them thrive in captivity.

You might have to do some research to find a reputable exotic reptile breeder but do so to ensure that your Gopher Snake comes from a line of well-bred captivity snakes. Snakes caught in the wild don’t do good in enclosures.

I hope this article answered whether Gopher Snakes make good pets and give you the information you need to decide if they might be the pet you want. If you have any other questions, please ask them in the comments to keep the conversation going!

Learn more about Are Red Tail Boas Good Pets? Here’s What you Should Know!

Can a Gopher Snake hurt you?

Gopher Snakes aren't venomous, but it can still hurt when they bite you.

They don't have fangs, but they clamp down hard on skin and can leave you with a bleeding mark when they strike.

Can I keep a wild Gopher Snake?

You should always buy a captive-bred Gopher. Those caught in the wild may carry parasites and have a problematic temper.

How much does a Gopher Snake cost?

You can only buy Gopher Snakes from an exotic pet dealer and expect to pay around $120 - $240 for them.

Is a Gopher Snake a good beginner snake?

Gopher Snakes can be great for beginners, but before you buy one, be ready for a 30-year commitment!