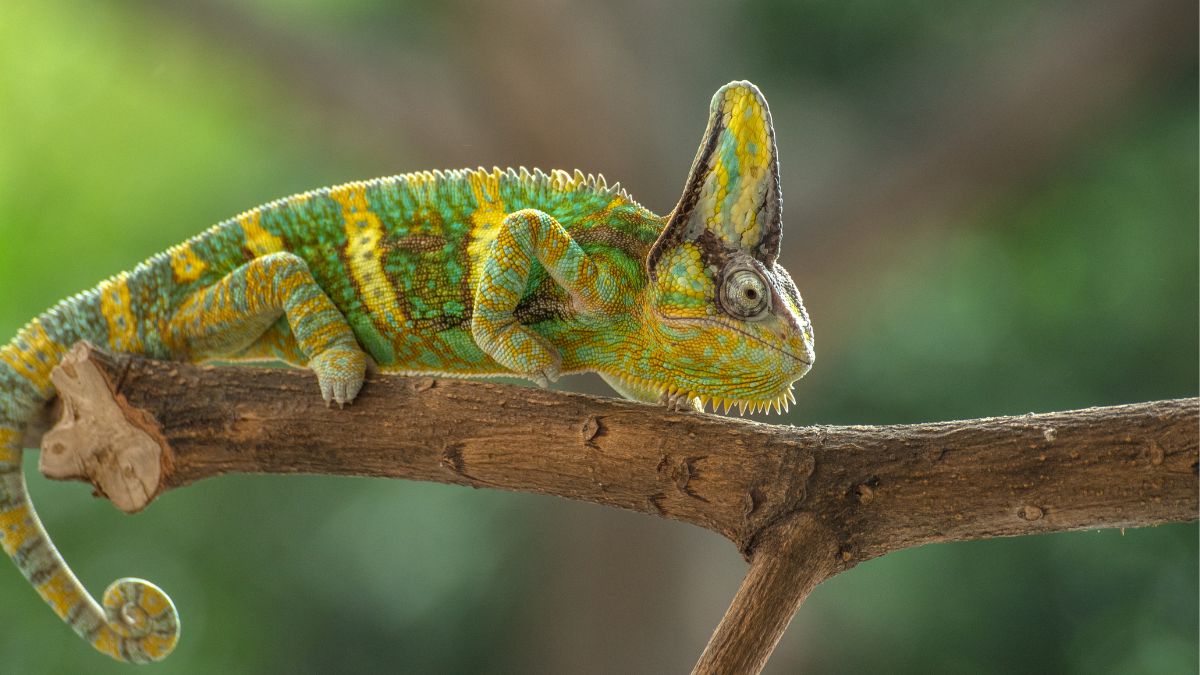 If you’re wondering where veiled chameleons come from, I’ve got you covered! These fascinating little creatures originated from interesting lands.

Chameleons seem like otherworldly creatures. There are many types, and each sub-species originates from a different habitat. While you’ll find some chameleons basking in the sun, others like rainy weather. Their skin, color, and bodily features help them adapt to their natural environments, making each chameleon look different from another.

In this article, I specify what Veiled chameleons are, where they come from and what it takes to keep one as a pet.

What Is A Veiled Chameleon?

Veiled chameleons are a chameleon species also known as the Yemen or Cone-head chameleon. They’re native to Yemen and Saudi Arabia.

At birth, these chameleons are pastel green. They only get colored stripes and brighter canvases as they mature.

This chameleon species grow a casque on their head that looks like a helmet or cone that lets condensation run into their mouths. The casque can grow up to 2 inches.

Male and female Veiled chameleons have these casques. Males often use their’s to show dominance over other male chameleons and possibly to attract females. 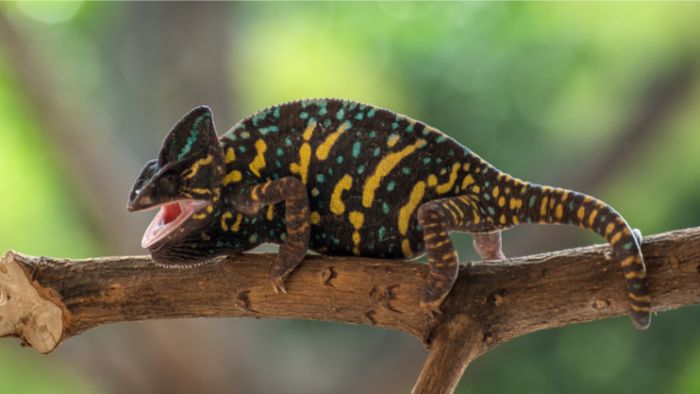 Where Do Veiled Chameleons Come From?

Veiled chameleons are native to tropical and semi-arid areas like the Arabian Peninsula in Yemen and Saudi Arabia.

They’re arboreal, so you’ll likely find them high up in trees in the woodlands and gardens. You may also find them in mountainous areas and valleys.

Can Veiled Chameleons Be Kept As Pets?

Veiled chameleons can make excellent pets if they’re kept in a safe enclosure on their own by experienced chameleon owners. They tend to get aggressive and territorial towards others and aren’t recommended for first-time pet or chameleon owners.

These reptiles require a lot of work and get stressed out very quickly. They also can’t be handled too much because they’re meant to live alone. There are many things to consider before getting a Veiled chameleon as a pet.

Veiled chameleons thrive in humid enclosures and need a lot of water. If you can’t keep their tank humid and wet, your chameleon pet won’t stay healthy. 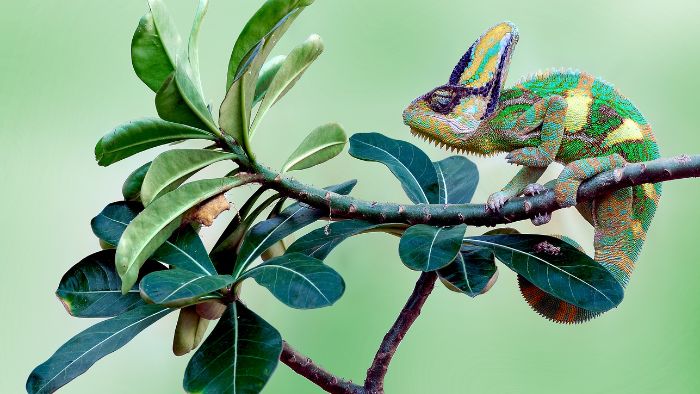 Chameleons drink water through droplets on plants, so you’ll need to create an environment with mist to provide them with water in this way. They’re also considered omnivorous, so they need a diet with both insects and greens. Chameleons prefer live insects like grasshoppers and crickets.

Chameleons are very interesting to look at. They’re slow, eat like ninjas, and some species even change color. But that’s about it. You can’t handle them often, and they prefer being stared at instead of touched.

The slightest problem with your veiled chameleon’s enclosure or diet can be fatal to them. You must thoroughly research chameleons before considering keeping one as a pet.

What Do Veiled Chameleons Eat?

You’ll need to feed your young chameleon twice daily but can scale down to once a day as they mature. Stick to live insects smaller than your chameleon’s head and any soft vegetables or fruits.

How Big Do Veiled Chameleons Get?

Female veiled chameleons kept in captivity can live up to five years, giving them enough time to grow to their full size at about 9 to 12 months. They can grow between 10 and 14 inches and weigh about 3 to 4 ounces.

Male veiled chameleons can live longer than females. They can live up to eight years in captivity if treated well. The norm for a veiled male chameleon is between 17 and 24 inches, weighing in at 3 to 6 ounces.

You should measure your veiled chameleon from the tip of its nose to the furthest end of its tail.

How To Tell What Gender A Veiled Chameleon Is

You can tell whether your veiled chameleon is male or female by looking for a bilge at the base of their tail or by measuring them. – males are always bigger than females.

Chameleons adapt well in captivity, but you shouldn’t deprive a wild one of their natural environment. If you want to keep a Veiled chameleon as a pet, find a reputable breeder who sells captive-bred chameleons. You’ll still have to mimic their natural habitat in their enclosure, but your Veiled chameleon will be healthier and adapt more easily if they don’t know the wild.

Veiled chameleons are enchanting, and there are little creatures who can compare to them. If you really want to see the beauty of these reptiles, you should watch them in their natural environment. The sight is captivating!

I hope you enjoyed this article about where Veiled chameleons come from. If you have any interesting facts to add about them, leave a comment. Questions are also welcome!

What is a chameleon's natural habitat?

Chameleons typically live in rain forests or the desert of Africa. You can even find some in the mountains. If you decide to keep one as a pet, you'll have to mimic their natural habitat in their enclosure.

Where did chameleons originate from?

Chameleons originated from Africa, Europe, and Southern Asia. Today, you can find them almost anywhere in the world where weather conditions are similar to these areas.

Why is it called a veiled chameleon?

Veiled chameleons get their name from the body cone on top of their heads. Male and female veiled chameleons have these, and they use them to carry water droplets to their mouths.

What class is a veiled chameleon?